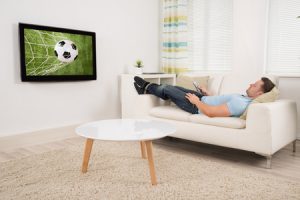 The Euros are well under way, which will mean for some there will be a considerable amount of time spent lounging on the sofa as they watch the competition in France. Make sure you are not the injury worry this summer and take care of your posture.

The British Chiropractic Association carried out its own consumer research and found 41% of people said that sitting for prolonged periods contributed to their back or neck pain and, with at least 75 hours of football on offer, some will be more at risk than ever of becoming couch potatoes! Our lifestyles are sedentary enough but, during televised sporting events like the Euros, people spend even more time sitting down. Lack of exercise is our worst enemy and we should avoid sitting for prolonged periods of time, as sitting incorrectly puts almost twice as much pressure on the back than when standing. And that’s not the only health hazard during this tournament. Football fans will argue that jumping up to celebrate a goal or berate the referee is an involuntary action, but doing it too quickly may be more harmful than sitting down for prolonged periods. So, going from a fixed posture when sitting down to quickly jumping up on your feet in excitement could be potentially damaging.

To ensure a pain-free Euro 16, here are some top tips from Shrewsbury Chiropractic Clinic:

This entry was posted in Blog. Bookmark the permalink.